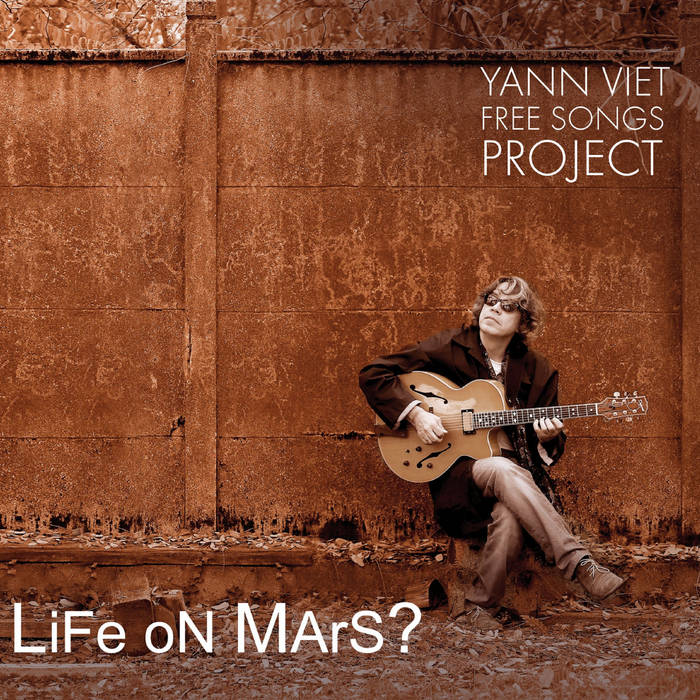 Life On Mars? is Yann Viet’s second album. Its repertoire, made half of covers (french chanson, jazz classics or pop...) and half of the guitarist's compositions, offers exquisite melodies, often very rich from an harmonic point of view. Every detail has been tastefully thought out, from the structures, the tone's combination, to the instrumentation's choice for each piece (from solo to sextet). The rhythmic part is composed of Michel Jullien on the battery, the amazing Marc Éliard on the bass guitar, double bass and accordion, and Jaco Largent - who has been part of the band Sixun for many years - on percussions. On the B3 organ, melodica and clavietta, we can hear William Lecomte (preferred pianist of famous violinist Jean-Luc Ponty for a very long time) and Sylvain Gontard and Gilles Relisieux on the trumpets and bugles. As for Yann Viet, he is very inspired from one end to the other, playing indifferently acoustic and electric guitar with a feeling revealing a remarkable sensitivity. While listening, we can not help but think of musicians who put lyricism, elegance, fluidity and sound quality before anything else, such as Pat Metheny, Larry Carlton, Philip Catherine... Here, guitar choruses are extremely well constructed and developped from phrase to phrase in a very natural way.

Marc Eliard (electric & acoustic bass guitars, accordion): After playing with Magma for four years, he has been playing the bass with the band Indochine for two decades. He has also recorded and toured with Mano Solo and Guillaume Payen, composed film soundtracks and played with the Dromadaire Trio, among other things. He has a unique sound, an amazing rhythmic sense and an exemplary open-mindedness. On two tracks, he plays the accordion, his former instrument.

Michel Jullien (drums & percussion): After working with Gilbert Bécaud, Sacha Distel, Jean-Pierre Alarcen and many others, he was the main drummer at the Lutetia hotel for 20 years, where he played with the best French jazz singers.

Sylvain Gontard (trumpet & bugle): He is one of the most in-demand local trumpet players (No Jazz, Nguyên Lê, Pierre De Bethmann, Ray Lema, Dominique Fillon and others). He is currently working with André Dussollier on his remarkable adaptation of Alessandro Baricco's play Novecento.

William Lecomte (melodica, clavietta, B3 organ): He has played the piano with J.L. Ponty for 16 years and had already played with Marc Eliard in the band Pastel. Therefore, it was only natural that he agreed to join us when we decided to include melodica and clavietta in the mix. The icing on the cake is that he offered to play the B3 on a few tracks!

Gilles Relisieux (trumpet & bugle): He has been a trumpet teacher at the conservatory in Le Plessis–Robinson since 1989. He acquired extensive experience as a composer by working for many editors as well as for television. He plays with the best Parisian big bands and is currently on tour with André Dussollier, for his Novecento adaptation, taking turns with the great Sylvain Gontard.

Jaco Largent (percussion): He was Sixun’s percussionist for 14 years and has worked with Jacques Higelin, Angélique Kidjo and Sting.

Yann Viet (acoustic & electric guitars, composition and arrangements): He created this project. He follows the tradition of guitarists like Philip Catherine, Pat Metheny and Larry Carlton, all musicians who prefer simplicity, a rather melodic sound and a repertoire made up of titles often conceived as simple songs. He teaches in the Paris region, every now and then works as guitarist-arranger for other songwriters and takes part in recording sessions. He also plays on stage in a duet with the cellist-bassist Olivier Soubeyran or with the bassist-double bassist Gilles Bioteau.

Guitarist Yann Viet has a large range of influences such as Metheny, Carlton, Catherine, Baker, but also Knopfler, Beck, Lockwood and Jarrett regarding instrumentalists. Definitely Brassens and Barbara for their poetic dimension and even some writers, painters and sculptors since for him, music is first and foremost something linked to storytelling and to matter and space occupation as well. ... more

Bandcamp Daily  your guide to the world of Bandcamp

Cannibal Corpse's George "Corpsegrinder" Fisher stops by for an interview